Pittsburgh, Myrtle Beach and Columbus Ohio: What a week!

November 15, 2021
On October 26, I drove to Pittsburgh to see our grandson, Brock Pickett, play in a soccer match at Duquesne University.  Brock is a freshman at Wright State University in Dayton.  After a successful high school soccer career in West Virginia and then Cleveland, he elected to attend Wright State.  Fortunately many of their games were broadcast on ESPN + so I was able to watch him play and begin to work his way into starting midfielder.  His heads up and energetic play won him a starting role.  Pretty impressive for a Freshman.  During the last half of the season, he typically played the full 90 minutes.  While Wright State did not advance to the Horizon League Tournament, the future for the team and Brock looks bright.  He was named to the Horizon League All Freshman Team.  It was the only time that I was able to see Brock play in person and his play was what it has always been:  heady, energetic and smooth.  When what you know about soccer you learned by watching grandchildren and one of their uncles play center mid, you begin to appreciate the flow of a match.  Brock was always in the flow.  I look forward to the next three years of his collegiate career.
Brock's Mom and Dad, Brendan and Eileen, flew to Pittsburgh from Myrtle Beach for the game.  We had dinner together and stay in the same hotel.  The next day they flew home--on a 5 AM flight--and I drove back to Rochester.  The next day, Marilyn and I flew to Myrtle Beach for a four day visit to see their new city and house, spend time with Braden who is going to the local community college in preparation for a teacher education program at Coastal Carolina, and to see Brady play football for the Myrtle Beach High School Seahawks. 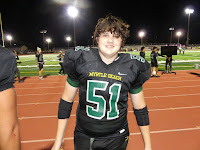 Brendan and family moved to Myrtle Beach this summer as Brendan assumed a new position for Ryan Homes.  Brady had been looking forward to playing football for Bay Village, a suburb of Cleveland as he entered his Sophomore year.  Instead he found himself in South Carolina trying to make the team the number one ranked AAA school.  We are proud of what he accomplished.  He came into the program and competed his way into the starting right tackle job beating out an upperclassman!  He played a great game:  no penalties and no sacks.  This is typical of his play this year.  At one point this season, he was the only offensive lineman to claim that honor.  After a  lopsided win over perennial rival, North Myrtle Beach, we got to celebrate.  You can see us all in the photo below.
Christian, by the way, is Christian Creel.  A little bit of thing that is Brady's girlfriend.  I confirmed with Brady that this is the case.  Apparently the week before, he sealed the deal by giving her his team sweatshirt after some weeks of their "talking together."  These are either local customs or I am hopelessly out of date on adolescent dating rituals.  Actually, both are true.  Regardless of my knowledge or ignorance, she was a delightful girl.  A little spunky which I liked.  She is some inches shy of five feet and Brady is closing in on 6'3'.  If he grows fully into his size 15 feet, he will certainly grow another couple of inches.
I have watched Brendan's kids play all sorts of sports over the last 20 years but I have never experienced anything like South Carolina high school football.  The stadium was packed with students, parents, grand parents, alumni and townspeople who follow the team like it is a college one.  There was a larger spirit wear shop--note the sweatshirts in the photo above.  This was a home game and the Seahawks came to the stadium from the fieldhouse on two school buses lead by a police escort with lights and sirens.  They entered the stadium through a tunnel created by the band and drum line. 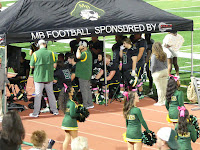 Starting players were introduced with a video displayed on the scoreboard's diamond vision screen which displayed video of the entire game.  Every time the offense came off the field, they gathered with coaches in a sideline tent to review video of their play.  Everything in the stadium seemed to be sponsored.  The opening ceremonies included the Seahawks entering through twenty foot high Seahawk skull, presentation of the colors, singing of the national anthem and finally a jet flyover.  Well, that last was only audio but it was a cool touch and I wouldn't have been surprised it is had been an actual jet.  Until recently Myrtle Beach was home to a squadron of  A-10 Wart Hog jets used in close ground support.  So as Hog fly by wouldn't be out of the question.  The video below gives you an idea of the ceremony around the game...before the game actually starts.
You can click here to view photos in the Google Album.  There are couple of nifty sequences showing Brady's outstanding work against Number 40!
Brendan and I spent Saturday morning out and about.  The Myrtle Beach airport has a fascinating history.  It was originally developed as an Army Air Corps base during World War II.  By 1948 it was no longer needed and was sold to the City of Myrtle Beach for $5 million.  But by 1955, it served again as an Air Force Base until the mid 1990's.  The city of Myrtle Beach actually donated the airport back to the government.  Civilian and military flights shared the main runway which meant that civilian flights  were limited to 30 per day.  The entire base including several administrative and social buildings and base housing were converted to civilian use as well.  Brendan and Eileen's new home in that area.
There is a park adjacent to the airport where we learned about this history.  It included static displays of the planes that were based here including the A10 Warthog.  The A10 carries up to 16,000 pounds of mixed ordinance.  Its 30 caliber machine gun is 20 feet long and weighs 4,000 pounds.  It carries 1200 rounds, each of which is 11 inches long and weighs almost a pound.  The seven barrels can fire 70 rounds per second.  It is this gun armed with armor piercing rounds that gave the A 10 the nickname, tank killer.
Marilyn and Eileen joined us for a drive on Pawley's Island and a visit to Myrtle Beach State Park where we were introduced to pier fishing, something Brendan has gotten into.  On Sunday we had lunch at restaurant in Murrell's Inlet.  All in all, wonderful visit.  You can click here to see some photos of where we were other than the football field.
We left for the airport Sunday afternoon to catch a 4:00 flight to Charlotte where a connection would get us home around 10:15.  While we were waiting to board that flight, delayed as it was, I got a message that our connection from Charlotte had been canceled leaving us little chance to get home that night.  We decided to go on to Charlotte since as a hub it offered better options for rebooking.  It was a mess when we arrived but thankfully I was able to use my phone app to book us on a 9:30 flight the next morning.  American gave us a voucher for an overnight stay at a nearby Hilton.  We left on a shuttle at 6:30 the next morning to find the following at the airport.
It was a longer than anticipated trip home.  We arrived on Monday and left the very next day for our next adventure:  Sr. Mary Helen Lebowski, RSM.

Popular posts from this blog 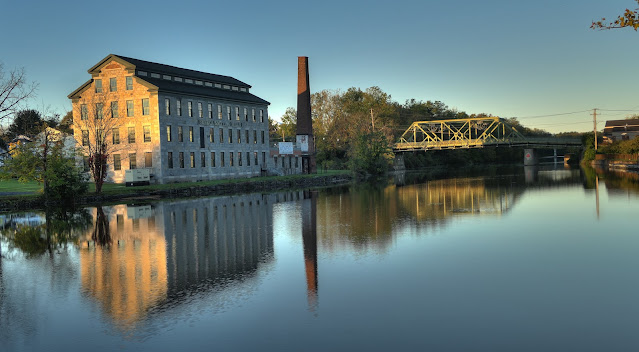 Seneca Knitting Mill Building:  Women's Hall of Fame With pickleball and various writing and quilting projects, our schedule has been a bit hectic the last month.  We decided it would be good to take a short break somewhere we had never been.  It is not completely accurate to say we had never been to Seneca Falls.  We had been through it a hand full of times and Bill had worked with St. Patrick's Parish during his time at the Diocese of Rochester.  However, neither of us had ever taken the time to visit and learn the history of Seneca Falls.  Hence it seemed a perfect place to spend two overnights.  This decision was confirmed when we found a wonderful Bed & Breakfast, Barristers.   Barristers Bed & Breakfast The house began life in 1860 and was a residence for several generations of only two families until 2001 when it was converted into a bed and breakfast inn.  Ken and Diane, our innkeepers, purchased the house in 2007 and have been providing outstanding hospitality
Read more

Manhattan Sunset I have a good friend who is from Brooklyn.  I called him from Brooklyn as we were enjoying the above  Manhattan sunset from the Brooklyn Heights Promenade.  He gave me some Brooklyn wisdom, "Manhattan may have everything but Brooklyn has the view!"  And what a view.  We have driven to Brooklyn for the wedding of Marilyn's niece, Marina Seitz, to Matt Ford.  We arrived late Friday afternoon after a harrowing transit through the city.  I had anticipated managing my way over bridges but instead, I was subjected to the challenges of not one but two tunnels:  Holland Tunnel from New Jersey to Downtown Manhattan and then the Brooklyn Battery Tunnel to Red Hook. The wedding was in Williamsburg in a small and very trendy hotel.  Most out-of-town guests stayed at the Marriott Brooklyn Bridge which was right on Brooklyn Bridge Blvd less than two blocks from the beginning of the walkway over the bridge.  After we settled in, we took a quick ten-minute walk to the
Read more