The Almost Annual Pilgrimage to Kansas City, Missouri that is.

I was born and raised in Kansas City MO along with my five siblings and five cousins.  I left in 1973 to move to Denver, then Detroit, then San Diego, and finally Rochester where I have lived for the past 35 years.  I have lived longer in Rochester than I did in Kansas City but the place where you grew up and especially learned to drive will always be home.  For most of those 35 years, I have traveled back to KC to visit my family.  Mom and Dad and my three sisters stayed in KC while my two brothers and I left.

This trip was special because I hadn't been home since January 2019 for the funeral of our baby sister, Louisa, and because all five of us were there at the same time.  Along with four spouses--Peter, Johnny, Sarah and Marilyn--we spent five days doing fun things and seeing new places and plenty of old haunts.  Typically we travel by car covering the 1,000 miles in two days with an overnight in Terre Haute IN.

We always seem to find new things to experience when we drive and this trip was no exception.  As we drove along I-90 from Buffalo into Pennsylvania, we were treated to mile after mile of large flowering trees along the roadway.  After a Google search, we determined that we were seeing Black Locust trees in their spring flowering.  Two weeks earlier or later and they would just have been green trees of a general sort.  Timing is everything.

Since I still enjoy driving long distances and Marilyn enjoys riding, we arrived at Anola and Peter's ready for whatever the next five days would hold.

Satchel Paige and some Missouri irony

We began by spending the day with Peter and Anola out and about in Kansas City.  Our first stop was Forest Hill and Cavalry Cemetery to visit the grave of Leroy (Satchel) Paige.  Yes, that Satchel Paige.  He had played for the Kansas City Monarchs from 1940-1947.  He married LaHoma Jean Brown in that year and they had seven children.  Kansas City was his home base.  He died in 1981 and is buried beside LaHoma on what is known as Paige Island in Forest Hill Cemetery.  The memorial contains Satchel's advice on how to stay young.  After all, at age 59 he pitched three innings for the Kansas City Athletics against the Boston Red Sox.  He faced 10 batters giving up one hit and no runs! 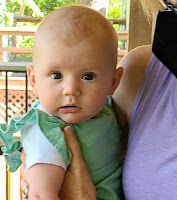 We were all invited to Kate and Ryan's expansive screen porch to meet the newest member of the extended family, Margot.  Kate is brother Terry's daughter and Margot is Kate and Ryan's first child.  Also Terry and Johnny's first grandchild.  And I must say that she is one beautiful baby.  We spent an hour and a half visiting and learning all about Margot.  Kate and Ryan are dealing with parenthood in their typical organized and well researched style.  At a ball game the next day, an infant was shown on the jumbotron. When the rest of us said something about sun block, Ryan immediately told us that the baby was too young for sunblock.  You can see more photos and videos of the visit by clicking here. 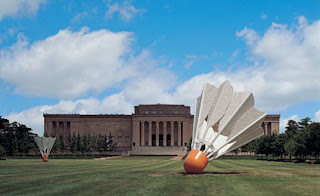 The Nelson-Atkins Museum of Art is known for its "encyclopedic collection of art from nearly every continent and culture, and especially for its extensive collection of Asian art.  In 2007, Time magazine ranked the museum's new Bloch Building number one on its list of 'The 10 Best (New and Upcoming) Architectural Marvels' which considered candidates from around the globe." (Wikipedia entry)  But the Nelson-Atkins is far from being a stuffy art museum.  It has an innovative, spunky and humorous spirit.  From the iconic 5,500 pound Claes Oldenburg and Coosje van Bruggen shuttlecocks to the Andy Goldsworthy Walking Wall, the Nelson-Atkins has sought to engage the public imagination and appreciation of art of all kinds.  And so, why not miniature golf.
"Art Course at the Nelson-Atkins is an artist-designed, mini golf experience located in the exquisite Donald J. Hall Sculpture Park. Each hole on this 9-hole course presents a creative interpretation of a work of art in the museum’s collection."  All nine of us played this fun and creative course.  Marilyn and I tied for low score, not that I want to brag.  Take a look at some of our fun below including Marilyn's hole-in-one, left-handed no less.
Kansas City Royals
On Sunday, the five siblings plus borther-in-law Peter and son-in-law Ryan went to a Royals game.  The boys in blue lost to the Twins 2-1 but we had a great time as you can see. 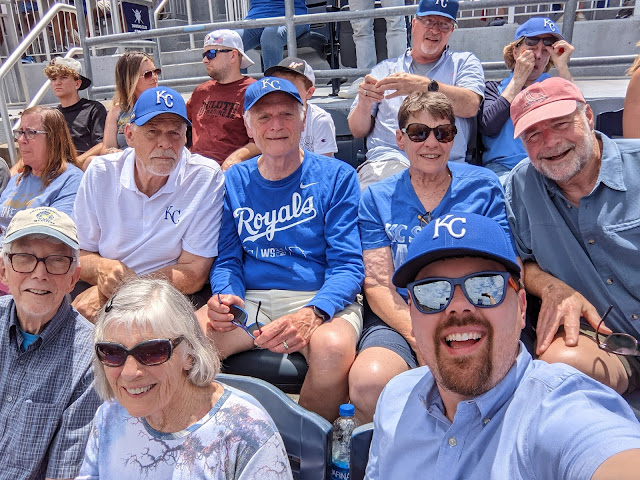 We spent one more day in KC relaxing in my old neighborhood and walking around the Country Club Plaza.  We left early the next morning for our two day drive back to Rochester and arrived safe and sound and ready for an event filled summer at home...until August when we head to Wisconsin.

Popular posts from this blog

Back in February, we began planning our first trip after our vaccinations.  While a family visit trip actually came first-- you can read about that trip here --we wanted to get south, just a bit, in order to experience spring just a bit earlier.  If you have followed our blogs over the years, you know that we love to visit gardens of all types.  Two years ago on our way back from Aidan's high school graduation in Charlotte, we spent three days in the Wilmington DE area visiting three of the many public gardens in that region.  We decided to return and stay a week to try to catch some of the early spring flowerings, especially in the woodland gardens.  The last week in April seemed a good choice but, of course, the weather would determine what was in bloom. However before we began that week, we drove to Centreville VA to spent the weekend with Tom and Sarah Pickett, Bill's youngest brother and his wife.  We hadn't seen them for over 14 months--Zoom notwithstanding.  It was w
Read more

Manhattan Sunset I have a good friend who is from Brooklyn.  I called him from Brooklyn as we were enjoying the above  Manhattan sunset from the Brooklyn Heights Promenade.  He gave me some Brooklyn wisdom, "Manhattan may have everything but Brooklyn has the view!"  And what a view.  We have driven to Brooklyn for the wedding of Marilyn's niece, Marina Seitz, to Matt Ford.  We arrived late Friday afternoon after a harrowing transit through the city.  I had anticipated managing my way over bridges but instead, I was subjected to the challenges of not one but two tunnels:  Holland Tunnel from New Jersey to Downtown Manhattan and then the Brooklyn Battery Tunnel to Red Hook. The wedding was in Williamsburg in a small and very trendy hotel.  Most out-of-town guests stayed at the Marriott Brooklyn Bridge which was right on Brooklyn Bridge Blvd less than two blocks from the beginning of the walkway over the bridge.  After we settled in, we took a quick ten-minute walk to the
Read more

As of March 11, Marilyn and I were fully vaccinated.  It took a while for us to venture out in a pre-COVID way.  On March 16 we drove to Buffalo to visit the Buffalo and Erie County Botanical Gardens.  The Gardens are in the Cazenovia-South Park System designed by Frederick Law Olmstead between 1894 and 1896.  This system is in South Buffalo with a portion in Lackawanna.  It is one of the four parks/park systems designed by Olmstead in Buffalo.     Buffalo and Erie County Botanical Gardens It was a lovely taste of spring but only on the inside.  It only whetted our appetite to travel south to experience spring gardens.  However, we did eat in a restaurant for the first time.  We stopped at J. P. Fitzgerald's in Hamburg and had some tasty Greek food on the day before St. Patrick's Day.   By March 21 we were getting more daring and were hosted by Derek and Erin at Pane Vino on the Avenue.  They had reserved one of the outdoor pods and we enjoyed our food and company in our own c
Read more